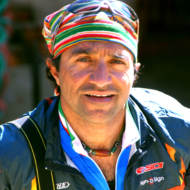 This user has not added any information to their profile yet.

I am a mechanical engineer who was born 1976 and currently living around the world, but originally from Iran.
I have been cycling around the world since 2006, following a dream I had for many years to see the world and its beauty in order to appreciate the life.

Since I started his journey, a project started called “ We Need Trees” which is an educational project to raise awareness and create love in kids heart toward nature.

Since December 2006, I have traveled 74 000 km through 53 countries and visited classrooms in over 263 schools on his way. ( by September 2015 )
In 2014 and after 8 years of doing this job he tried to set this association with support of 3 other Swiss citizens in order of building up a network around the world to educate kids in a larger scale.

We believe that encouraging the younger generation to think critically on the importance of trees, this young generation may recognize that trees are critical to our future as a species, and thus transfer that appreciation to help repair our damaged planet.

All right reserved by We Need Trees Association 2022